What Do Kangaroos Eat? 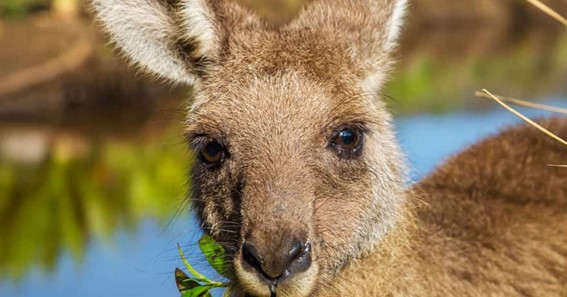 A very short and simple answer to the question of what do kangaroos eat is that Kangaroos are herbivores animals they eat plants and vegetables. It also depends on where the kangaroo lives. There are four different species of these large marsupials found in Australia. The main 4 different species of kangaroo are the Red Kangaroo, the antilopine kangaroo, the western grey kangaroos, and the eastern grey kangaroo. All these have a slightly different diet from one another.  In this article, we will tell you a lot about What do kangaroos eat. Keep reading to know many facts about these Australian natives.

What Do Kangaroos Eat?

Kangaroos eat grass, leaves, flowers, moss, fern, and also insects they are herbivores animals Same as cows the kangaroos also regurgitate their food and re chewing before digesting.

The Red Kangaroos also are known as Red Giant Kangaroos eat Grazes on grasses, Some flowering plants, and shrubs. The most unique thing about them is the Red Kangaroos are the Largest Marsupials that can go without water for months. They are mostly found in Arid and semi-arid parts in central and western Australia.

A male Red Kangaroo can grow up to 7 feet in height and can weigh 200 pounds. The female Red kangaroos are smaller and have blue-grey fur coats whereas the male has a red fur coat. Both males and females have ears that are long and raised. They have a rectangular face with a marking of white and black.

Antilopine Kangaroos also are known as Antilopine Wallaroo or Antilopine Wallaby eats Grazes on short and green grasses. The uniqueness these species have is that the fur they have is similar to the antelopes. Antilopine is mostly found in the Northern areas of Australia.

The Wallaby Kangaroos are small in size than other kangaroos Antilopine Kangaroos grow up to 4 feet in height and can weigh 108 pounds. They have red tan fur, dark paws, and black snout tip, the females have more grey in their reddish tan fur.

The eastern kangaroos can grow up to 6.6 feet in height and 146 pounds of weight. They have a very muscular build with a long and powerful tail. There have large and wider eyes. They have a grayish outer coat and cream or silver bellies.

The Western Kangaroos like to eat grasses, leaves on low trees, and leafy shrubs. The western kangaroos are known by many names like Sooty Kangaroo, Western Grey Giant Kangaroo, Mallee Kangaroo, and Black-Faced kangaroo. The Uniqueness of this species is that the males produce a distinctive odor that is compared to a curry. They are mostly seen in Southern and Southwestern Australia.

The western kangaroos can grow up to 4.3 feet and weigh 119 pounds. These are the smallest sized kangaroos with darker greyish-brown fur with darker coloration around their head. The males are also nicknamed as stinkers as they produce an odor.

Some Interesting Facts About Kangaroo

The Kangaroos are very interesting animals and are loved by everyone. Below is more information about Kangaroos and their life.

The kangaroos are large animals that hop with their springy hind legs and feet which are much stronger than their arms. According to the San Diego Zoo, the kangaroos can jump up to 15 feet that are 7 meters in a single hop. They can hop at a speed of 30 mph that is 48 kph. Kangaroos are social and live in groups. The group of kangaroos is called a mob, a herd, or even a troop.

Kangaroos in Mob groom and protect each other. If a kangaroo suspects a danger in the area it stomps its foot on the ground to alert others. A kangaroo comes to a fight it will kick and box at its opponent.

The kangaroos are very well known for carrying their young babies in the pouch on their belly. A female kangaroos pregnancy time is for 21 to 38 days. The female kangaroo can give birth to 4 offsprings at a time although it is very unusual.

When born the babies are called Joey and their size can be as small as a grain of rice and even as big as 0.2 to 0.9 inches as per San Diego Zoo. As the baby Joey is born they are guided safely in the pouch of their mother’s pouch for 120 to 450 days.

The Joey in the pouch is protected and feeds in the mother’s pouch. The pouch has a lining that absorbs all the mess and also the mother cleans it out occasionally. When cleaning the Joey are attached to the nipples of the mother.

Joey grows quickly that is females in 14 to 20 months and Males in 2 to 4 years become mature.

The kangaroos are Herbivorous animals they feed on grasses, leaves, flowers, fruits, and vegetables they never eat meat.

What Do Kangaroos Eat On The Beach?

The Grey Kangaroos and The Wallabies are the two types of kangaroos that may their way on the beach every morning to feed with seaweed and mangrove seed pods that are washed by the overnight tides.

The kangaroos can eat large amounts of low protein food such as native grass and browse. The bread is very soft and if it is regularly eaten by them it may cause gum problems.

Kangaroos are Herbivorous animals. They feel threatened and so typically they attack humans. The Government of Australia urges people to not feed a kangaroo.

What Do Kangaroos Drink?

How Long Do Kangaroos Live

A Kangaroos average life span is of six years to 20 years depending on the captivity and type of species.

Are Kangaroos Friendly To Humans?

Whilst many people see large male kangaroos as placid grazing animals. The reality is that they can be aggressive towards people. Although the risk of this happening is very small, we still need to be wary around them.

Kangaroos eat grass, leaves, and flowers, human food can cause nutritional imbalance, illness, and obesity in them. The kangaroos do not feed on one place for a long time if they do so they are likely to ingest the parasites on grasses. What do kangaroos eat has a simple answer they eat grass and leaves.

What Is The Difference Between Mouse And Rat?

How Long Do Spiders Live?