The Best Sonic Blast Flavors You Have Got to Try 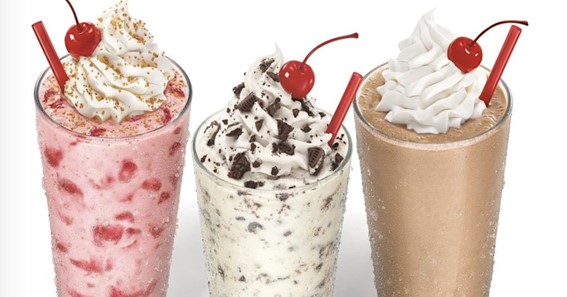 The Best Sonic Blast Flavors You Have Got to Try

One of the reasons why visiting a Sonic Drive-In is because here, you can get a Sonic Blast. This is basically a creamy concoction with the vanilla soft-serve ice cream as the base. Then the mad wizards at Sonic blend in various other ingredients, and you have a Sonic Blast.

The price of a Sonic Blast is around $4.58, so it’s not exactly an expensive item to order. If you want, you can just order a different one each visit. But if you’re trying to make sure you get an excellent Sonic Blast, then you should start with these terrific options:

There has long been a debate regarding the relative merits of chocolate vs. vanilla. And that debate rages on, online. Some say that chocolate is better, but then again, you have people who insist that vanilla is superior.

Of course, one objective way to look at this is to agree that everyone has the right to their own opinion. But there’s another approach—why pick between the two? Just get both! And that’s the approach exemplified by the Chocolate Chip Cookie Dough Sonic Blast.

It’s actually not a complicated recipe. It starts with the Sonic soft-serve vanilla ice cream, then they blend in chunks of the chunks of chocolate chip cookie dough. It’s that simple.

But those two ingredients are just excellent, and they somehow work together so that 1+1=3. You get utterly rich and creamy soft-serve vanilla ice cream which works perfectly with the tiny bits of the chocolate chip cookie dough. It’s as if the vanilla somehow brings out even more of the chocolatey goodness out of these chocolate chips.

Plus, the cookie dough texture is just right. It’s already soft, but you get a nice bit of crunch as well.

Click here – A Crypto Guidebook for a Late Entrant – What Should You Consider?

While we may rank this second on the list, some of its fans will insist that it’s the absolute best among all the Sonic Blast flavors. We tend to agree that it’s excellent. In fact, it’s not much of an exaggeration to say that this doesn’t seem to belong to a fast-food drive-in joint. It’s like the signature dish at a gourmet ice cream restaurant.

It uses real ice cream, and then combined with cheesecake, graham cracker crumbs, and real strawberries. The result is a shake that’s thick and creamy, which is then finished off with whipped topping, even more crumbs of graham cracker, and a literal cherry on top.

The resulting flavor is super strong, and superbly tasty. Once you get a taste, you might not care about the calorie and sugar content at all!

This is a relatively newer flavor, as it came out only in 2020. Starting with the vanilla soft-serve ice cream, the folks at Sonic then blends in some brownie chunks along with salted caramel.

Yes, it’s a rather imaginative combination, but it works. That’s true especially if you’re a fan of both brownies and caramel.

Perhaps the only fly in the ointment here is that for some people, there aren’t enough brownie pieces and the caramel flavor is perhaps a bit too subtle. But you can just ask for extra caramel and brownies to be blended in, and the problem’s solved.

There are quite a few candy-based flavors here with the Sonic Blast options, and the Snickers Blast is probably the best of them all. This despite the fact that this option simply blends the Snickers Bars into the vanilla soft-serve ice cream. Again, just because it’s simple doesn’t mean it can’t be great.

Of course, it can also be argued that a Snickers Bar may be a bit more complex than people might suspect. It has a rather wide range of ingredients, including nougat, caramel, peanuts, and the milk chocolate coating. So, you have more individual flavors mixing in, and the resulting taste and texture are just fascinatingly delicious.

It also helps that unlike with the Caramel Brownie Sonic Blast, here Sonic puts in rather large chunks of the Snickers Bars. So, you really will get to taste those flavors.

This is an even newer flavor, coming out in 2021. With all that time off with lots of closed restaurant during the pandemic years, the wizards at Sonic probably spent a lot of time thinking of new flavors to introduce. And this is excellent.

Of course, we’re back to a rather simple combination. This time, you have the vanilla soft-serve ice cream, with pieces of plain cheesecake blended in. The combination really works, as many fans have already attested to.

Also, there’s no way that you won’t notice the cheesecake flavor here. You really get a “blast” of that cheesecake flavor. And because of that flavor, this creamy concoction is absolutely marvelous.

To Know Some Great Stuff Do Visit JetFamous

To Know Some Great Stuff Do Visit JobEngg

To Know Some Great Stuff Do Visit ListyTop

What are The Crucial Rules to Follow While Availing Personal Loan?

A Mattress Choosing Guide: Picking The Right Mattress For Yourself

How To Fall Asleep Fast: The Ultimate Guide To Sleeping In Less Than Five Minutes