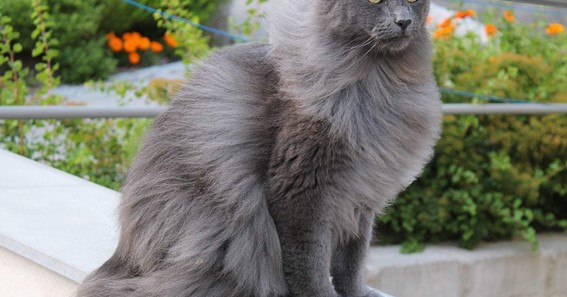 Nebelung cat is a great pet as they are very loving and have an affectionate nature. They look very similar to the Russian blue cats and are often compared to them. They are capable of making strong and emotional bonds with their owners and human beings. This breed of cat is very cheerful and likes routine. Not only this these cats have many other special traits which make them a good choice for petting. Read the article till the end to know more interesting facts and details about the What is a Nebelung cat?

Nebelung cat is a rare pedigree breed of domestic cats and has long bodies. They have long necks with medium to long shiny and soft coats. They have almond-shaped eyes and they come in single colors like blue, black Nebelung cat and their coats are usually silver-tipped.

One of the most attractive features of them is the colorful set of wide eyes which range from yellow to green and vivid green halo.

They have thicker hairs around their neck and in males, it is more prominent. The Nebelung breed cat has tails with longer hairs than their entire body. You can even find a tuft of hairs in between the toes and behind the ears.

How rare are Nebelung cats?  The Nebelung is a very new breed of cats and its name means ‘creature of mist’.

In the early 1980s, a lady Cora Cobb gave her son a black short-haired cat, and this cat mated with a Russian blue male and gave birth to a little kitten which they named Siegfried.

Later in the mid-eighties, the other female kitten was born with the same hair type which they named Brunhilde.

Soon the Cora started a breeding program using Brunhilde and Siegfried. Both these cats were very similar to the Russian blue cat but they were given a different status and were recognized as Nebelung breeds.

The height of this Nebelung breed cat is about 9 to 13 inches with a medium structure.

These cats grow into their complete adult size by the age of 2 years.

The most common colors that you can find in these cats are in the range of blue to dark gray.

Nebelung cats have sweet, affectionate, devoted, and loyal personalities. They are playful and intelligent. Once you become their favorite human being they won’t leave your lap.

This breed is good with routines and tends to adapt slowly to the changes.

They love attention and like human company. These cats are very particular about their environment and maintain cleanliness.

The Nebelung breed cats are shy around strangers and often hide or maintain a safe distance from them.

These cats are very playful and select a few humans to be with whom they get comfortable. They don’t create a mess or make sounds until their food dishes or the cat boxes are empty.

The Nebelung food should be of the best quality with high protein.

Also, you should take care that these cats are not fed with dog food.

Nebelung cats make strong bonds with family and are pretty much devoted to them. They are very gentle and good with kids and other pets in the house.

These cats are very active so you should make sure that you keep toys and other things that keep them stimulated and playful.

This breed tends to follow routines so the slightest changes in the schedule might disturb them so you must take care of it.

The Nebelung breed cats grow their full soft shiny coat in two years. You must comb their hairs properly to prevent excessive shedding.

This Nebelung cat breed is a new breed and no major problems are recognized overall and they have a long life span of about 16 to 18 years maximum.

The most common problem in these cats is obesity as when they like some food item they eat it in excessive amounts. If spoilt and given too much food they tend to get fat and lazy.

The other problem that has been seen in these cats is periodontal diseases which happen due to poor oral hygiene. You must make sure that you get your cat’s teeth brushed often.

Here are some pros and cons of a Nebelung

Now, I will give you a quick highlight and facts about the Nebelung breed cat that you must know.

Nebelung breed cat and the Russian blue cat are so similar to each other that they are often confused.

Yes, the Nebelung breed cats are new and rare. They are made by the cross of the Russian blue cat and the black short-haired cat. These cats are known for being gentle, playful, and affectionate.

What Does It Mean If My Patronus Is A Nebelung Cat?

Nebelung is a rare breed of domestic cats and it comes from the word meaning fog and mist. These are gentle and well-behaved cats and having Nebelung as your Patronus means you prefer to know about the situations and are strengthened by understanding.

Nebelungs form a strong bond with human beings and are family cats. These cats are affectionate and loving and they accept the company of other cats and people around them.

Can Russian Blues Be Long-Haired?

The Russian blues are soft short-haired and pale blue to gray cats. They originally don’t have long hair but these days they are bred with a variety of other cat breeds. The Nebelung breed cat is popularly known as the long-haired Russian blue.

The Nebelung is a quiet, gentle cat that can be quite shy around strangers or lots of activity. They are affectionate with their owners and are definitely a lap cat. They can do well with another cat or dog that has a similar temperament but may become fearful and anxious around a more active and energetic cat or dog.

The Nebelung cat is one of the new and rare breeds of cats. They are known for their beautiful physical aspects like the plush long hair coat with a wide set of yellow to green eyes. These cats are loving, friendly, loyal, and devoted to their owners. They are playful but they get shy and hide in front of strangers. These cats are highly intelligent and crave routine. You don’t have to give much thought to bring them home as they are good with kids and other pets. I am sure that after knowing about the lovely Nebelung cat you will consider it bringing home.